We Have Got Enough Milks Now. Would Everyone Stop Milking Sh!t – Part 1 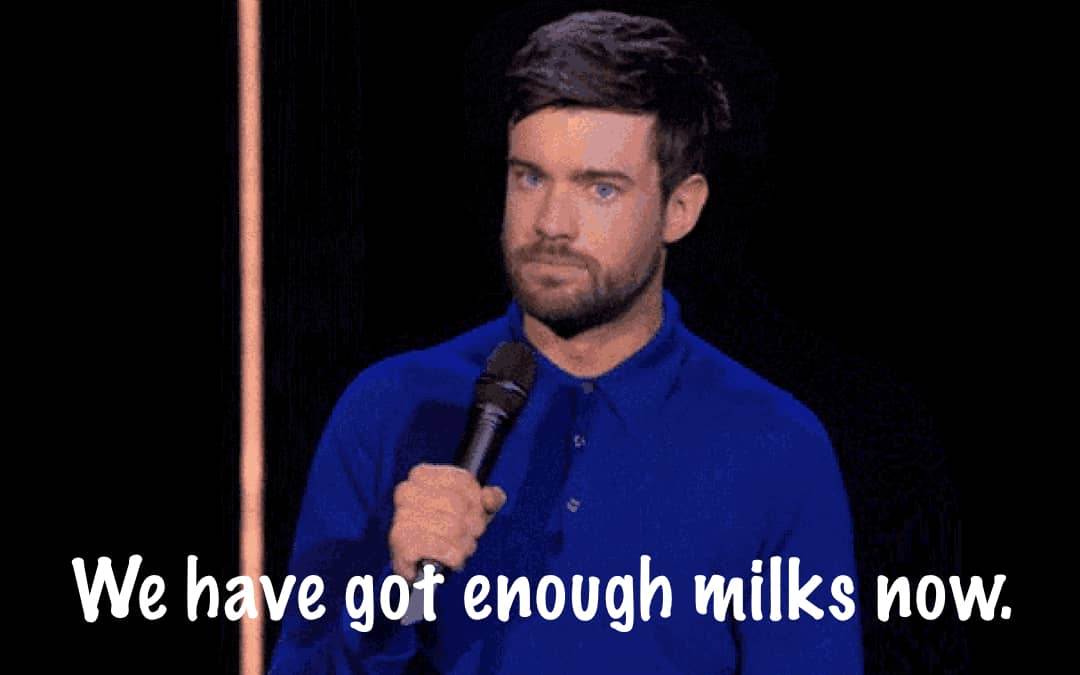 I have no doubt that lactose intolerance is a grave issue faced by thousands of you coffee lovers daily, but looking at the boom of alternative milk production over the past couple of years, I can say that your issue can officially take a backseat. Excuse the pun but holy cow! Have you seen the aisle of milk alternatives at your local grocery store? It’s even longer than the never-ending queues of cars waiting for a refill at your local petrol station before the petrol price goes up, yet again!

It seems as though every person in the health food industry is coming up with new tricks on how to take anything approximately the same size as a nut and squishing it into something that looks vaguely similar to the classic creamy cows milk we’ve come to love. Heck, we were even tricked in our youth to down a whole cup of cow juice with some steaming chocolate chip cookies straight out of the oven. Oh, how times have changed.

Even the most mundane of coffee orders have now begun to puzzle the brightest of the coffee enthusiasts of our day and age. Take the classic cappuccino for instance. A beautifully simple fusion of sweet and acidic espresso cut with frothy, creamy milk – typically from a cow. Nowadays the business of ordering a coffee has become much more complex.

The classic question of whether you would like your milk hot or cold has taken on a new look with the advent of the mass production of alternative milks. Countless nuts and legumes have suddenly taken to the spotlight in the milk production industry. Ranging from the classic almond milk to something a little more exotic like macadamia nut milk or even hemp milk.

So, the question you should be examining very closely is whether you’d like your milk squeezed from a bean, from a pulse, from a grain, from an oat, from a nut, from a flack, from a seed, from a leaf or from a tree.

Starting with the Basics – Almond Milk

The problem with discussing milk alternatives in this blog post alone is that there are way too many to even name, let alone describe and talk about without boring you to death and causing a mass resurgence of the cow milk industry. So to keep things short and simple, we’ll discuss the pros and cons of many of your favourite milk alternatives, with some cheeky comments and hilarious prods to make it worth your while, in separate blog posts.

I hope you’re ready with a steaming cup of some Out of This World Coffee with a tad of almond milk because today we start with the basics!

Sorry to disappoint the animal loving hipsters and lactose intolerant sufferers who claim this concoction as their own, but almond milk was around way before the current almond milk bonanza. In fact, the almond tree was one of the first to be domesticated and trained in the art of producing almonds for our consumption. Its use can be traced back to Baghdadi recipes and we like to refer to them fondly as King Tut’s Nuts, considering they were found buried next to him in his eternal resting place. (Unlike his nuts though, these stayed un-shrivelled for centuries!) Additional recipes included French almond milk soup, some Icelandic almond milk yoghurt and even some fake eggs that only the English could have thought of as a ‘good idea’.

The big boom of almond milk occurred in the Middle Ages where it really gained traction and Europeans couldn’t stop drinking the stuff! It basically appears in every single recipe book from medieval Europe and was used as a fitting replacement for that old cows milk, which spoiled quickly leading to some rather unpleasant visits to the lavatory, and wasn’t allowed to be consumed during fasting periods such as Lent.

Considered to be one of the best alternative milks out there by thousands worldwide, today the market has returned the once beloved almond milk that captured the hearts of our ancestors.

The Way an Almond is Milked is Just Nuts!

Wonder where to milk your almond nuts no longer! With this handy dandy documentary, detailing the ins and outs of the Almond Milking Industry you’ll be able to distinguish between your male and female nuts in no time! But if you’re like us and don’t have the extra cash lying around to purchase your very own flock of gerbils, or better yet a tandem nut milker to get that fresh warm milk out of your nuts, we have a much easier solution which is almost as good as the real thing. All you need to do is follow the almond brick road:

Is the Humble Almond the Cow of the Future???

Now for the big question. How does it stack up against the classic cow juice?

It may surprise you that this popular nut isn’t as cracked up as it’s thought to be. Although you can create some smooth latte art for some flare, this milk has a tendency to curdle and make for a lumpy watery drink underneath. Another downside of almond milk is that the unsweetened versions can leave you with a bitter aftertaste in your mouth.

Did you know that some almond milks are just 2% almonds! So despite all the health elements that almonds can provide like your dose of vitamin E and some other fancy vitamins and minerals to help you churn out your work day by day, the ugly truth is that it ain’t great. Not only are you gaining only a minuscule amount of nutrition but you’re also using a ton of water which could be used for much better things (LIKE MAKING COFFEE!)

So unless you are one who absolutely loves the flavour that almond milk adds to your life, we would suggest one of the other alternative milks that we will delve into in this series of posts to come…